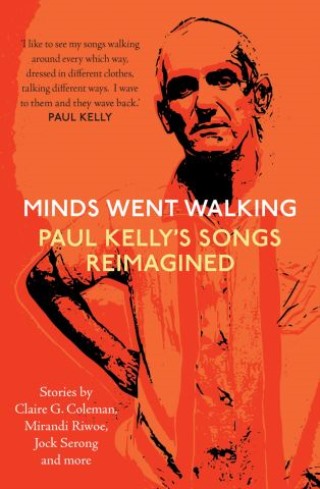 Jock Serong, Mark Smith and Nail A. White posed the question: what would happen if a group of Australia's finest writers were invited to let their minds go walking through the Paul Kelly songbook? The writers responded with tales of forbidden love, with the ghosts that inhibit St Kilda and the 'special treatment' of the Noongar people; with the dumb things they did when they crossed the Nullarbor, and how a simple song could bind a father and daughter forever. Contributors include well-known musicians, award-winning novelists, crime writers, children's author and more including Robbie Arnott, Alice Bishop, Zoe Bradley, Sam Carmody, Jake Cashion, Lorin Clarke, Claire G. Coleman, Sarah Drummond, Laura Elvery, Kirsten Krauth, Julia Lawrinson, Matt Neal, Bram Presser, MIrandi Riwoe, Tim Rogers, Angela Savage, Jock Serong, Mark Smith, Neil A. White, Gina Williams and Michelle Wright. Like Paul Kelly's song, these stories will take you anywhere, and everywhere, and they will keep coming back to you like a cork on the ride.

Mark Smith: Jock Serong is a well-known, multiple award-winning author who divides his time between Port Fairy in Western Victoria and Flinders Island. Mark Smith is an award-winning author who lives, works and surfs on Victoria' s Surf Coast. He is the author of three YA titles, short story fiction and his work has appeared in Best Australian Stories, Review of Australian Fiction, The Big Issue, The Victorian Writer and The Australian. Neil A. White was born in Melbourne and educated in his native Australia and the United States. He is the author of the novels Closure, Turn A Blind Eye, something for Bebe, and a number of award-winning short stories. He and his wife live in Dallas, TX.