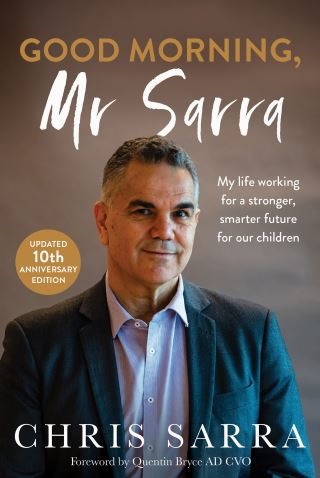 My life working for a stronger, smarter future for our children

One man' s fight to turn the tide of low expectations. When Chris Sarra arrived as the first Aboriginal principal of Cherbourg State School, it was a time of high hopes but low expectations in Indigenous education. Over six years, he transformed the school into a national success story. Along the way, he battled the media, the education system and a culture of complacency. Good Morning, Mr Sarra is the inspiring life story of a young boy from a country town who grew up to become Queensland' s Australian of the Year, a subject of ABC' s Australian Story and one of the most outspoken and recognised educators in the country. His leadership institute and its nationally acclaimed &#8216; strong and smart' philosophy, now used in many schools, means that Indigenous children no longer hope for a better education; they can expect it. In this anniversary edition, Chris Sarra reflects on his recent life and career achievements, from becoming a marathon runner to advocating for the marginalised as a director-general in state government, and how his work is helping forge a path to Treaty.

Chris Sarra: Chris Sarra is the head of the Stronger Smarter Institute at Queensland University of Technology and the former principal of the Cherbourg State School. Born in Queensland' s Bundaberg in 1967 as the youngest of 10 children to an Italian father and an Aboriginal mother, Chris Sarra is now the head of the Stronger Smarter Institute at QUT. He was formerly the principal of Cherbourg State School. He has had an extensive career in education, completing a Diploma of Teaching, a Bachelor of Education, a Master of Education and a PhD in Psychology.