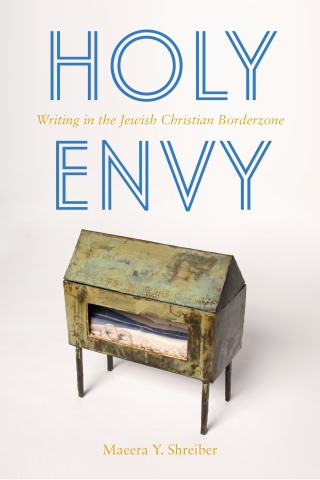 Writing in the Jewish Christian Borderzone

What is between us and the Christians is a deep dark affair which will go for another hundred generations . . .” (Amos Oz, Judas)

Among the great social shifts of the post–World War II era is the unlikely sea-change in Jewish Christian relations. We read each other’s scriptures and openly discuss differences as well as similarities. Yet many such encounters have become rote and predictable. Powerful emotions stirred up by these conversations are often dismissed or ignored. Demonstrating how such emotions as shame, envy, and desire can inform these encounters, Holy Envy: Writing in the Jewish Christian Borderzone charts a new way of thinking about interreligious relations. Moreover, by focusing on modern and contemporary writers (novelists and poets) who traffic in the volatile space between Judaism and Christianity, the book calls attention to the creative implications of these intense encounters.

While recognizing a long-overdue need to address a fundamentally Christian narrative underwriting twentieth century American verse, Holy Envy does more than represent Christianity as an aesthetically coercive force, or as an adversarial other. For the book also suggests how literature can excavate an alternative interreligious space, at once risky and generative. In bringing together recent accounts of Jewish Christian relations, affect theory, and poetics, Holy Envy offers new ways into difficult and urgent, conversations about interreligious encounters.

Holy Envy is sure to engage readers who are interested in literature, religion, and, above all, interfaith dialogue.

Maeera Shreiber: Maeera Y. Shreiber is Associate Professor of English, and former Director of Religious Studies, at the University of Utah, where she teaches and writes about poetry, Jewish American literature, ethnic American studies, religious studies, and interfaith relations. Professor Shreiber is the author of, among other books, Singing in a Strange Land: A Jewish American Poetics.